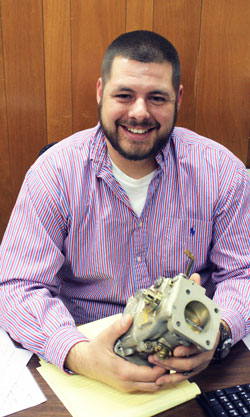 Meet Mark Keeney Jr., the customer relations and product support specialist at Marvel Schebler. Mark mans the phones at the office and helps solve client’s problems on a daily basis. For application data, carburetor assembly questions, or anything else, Mark is there to help.

So how did Mark become an expert in such a complex industry? According to him, it all began with his knack for remembering different carburetor part numbers and being able to memorize troubleshooting guides. Initially, owner Tim Henderson was also a “wealth of knowledge” to Mark. “I think for the first two years my catch phrase was ‘Let me call you back.’ Talking to the guys with experience on the job is how I got it down,” said Mark.

After working with Marvel Schebler’s family of companies for 11 years, Mark still finds his job rewarding. “Most days it’s a lot of fun,” said Mark. “General aviation as a whole is a very small community. Everyone knows you; it’s kind of like your town except spread out all over the world.”

With Marvel Schebler, Mark has the opportunity to travel about three times per year. He speaks at Aviation Institute seminars and even goes to air shows with the company. Last year, Mark attended one of the nation’s largest air shows in Oshkosh, Wisconsin. “Oshkosh was amazing,” said Mark. “You can see really old airplanes, World War II stuff and P-51 Mustangs. Most places, if you see a Mustang it’s like finding a golden egg. Then you go to Oshkosh and there are 35 of them down the row.”

Surprisingly enough, before working with Marvel Schebler Mark had never been on an airplane! His first real flight was on a business trip from Cincinnati to Seattle. “The flight was about six hours, so if I didn’t like it I had a lot of time to sit there and not like it,” said Mark. Now, however, Mark is a seasoned pro when it comes to traveling.

Outside of work, Mark enjoys playing softball, riding his Harley Davidson motorcycle, and spending time with his wife and two children. He is a big West Virginia football fan and enjoys an on-going rivalry with a friend who supports Oklahoma.

So if you end up needing technical help with your aviation carburetor you are likely to find out what a great asset Mark Keeney, Jr. is to Marvel Schebler and the general aviation world.